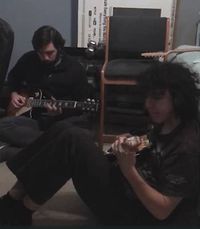 The Good Latimer song “Let It Go” off the album Go Where It Snows is NOT the Disney song from Frozen.  In fact, the song was written by Aaron Salinas, Michael Klym and Michael Zaring way before Olaf ever uttered a word on the movie screen (listen here: LET IT GO).  It was one of the first two demos I heard from the band that got me interested in the project.  It is a clever unusual song written in reverse.  Typical songwriting starts with a verse (subdued), then branches occasionally into a rise or pre chorus (building excitement), and then hits the chorus for the payoff (generally the most powerful and memorable section).  This song begins with a full blown rockestra (aka rock orchestra), then moves to a punchy melodic uptempo verse, then abruptly slows down into a dreamy soft pre chorus, and then hits the chorus in a relaxing slow movement reflecting the title of “Let It Go.”  And if that’s not enough, there is another musical switch when the acoustic bridge comes in, which is actually an acoustic version of the rockestra intro.  Here is the amazing part… there are about 7 different tempo changes throughout the song!  The way I just described it… you would think the song is a mess and hard to listen too.  But it’s actually one of the most beautiful songs on the album, packed with musical hooks and vocal harmonies (every band member sings on this one).  My recommendation is to listen to the song on headphones, so you can hear every detail in the stereo mix.

On a side note, the huge rockestra intro was not originally in the demo.  Instead, it was an acoustic guitar part strumming the chords similar to the bridge.  However, after hearing the lyrics, I suggested the music would better serve the song if it began in a loud and chaotic thunder; reflecting the opposite of the soothing chorus advising the listener to “Let It Go.”  This idea (among others) was tossed around for months and months, and we left the intro section empty and undone until the end of the recording.  Once we realized that “Let It Go” would be the last song on the album; and that “See You In Hell” would lead into it, the need for a huge musical intro became more logical.  So, we began to build up the section with lots of tracks and instruments.  However, despite plenty of musical tracks to mix, I was still having trouble getting it to sound bombastic.  Luckily, Michael “I Love Reverb” Klym stepped in and began experimenting with reverb and delay on every track… and he made it work.  Feeling energized by this breakthrough, I proceeded to finish the mix and worked to make the transition from intro to verse seamless.

One of the most ethereal musical sections of the album is the ending to “Let It Go.”  It is a wonderful combination of piano fills, melodic bass, multiple guitars, and the smooth drum work of Hubert Payne (of Little Big Town fame).  Here is a fun video clip of Michael Zaring and Aaron Salinas trying to work out the final guitar parts (studio work is tedious, so laughter is essential to keep things flowing):

Special thanks to guest drummer Hubert Payne, who always does fantastic work.  If you are interested in his services, contact Hubert at: https://www.airgigs.com/user/Hubertpayne.